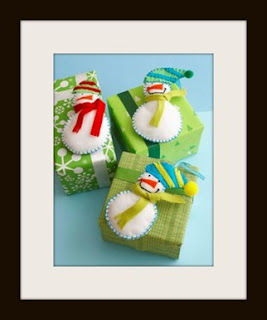 "I thought I had Christmas all wrapped up.  I was wrong!"


Five days before Christmas my daughter sends me this link. 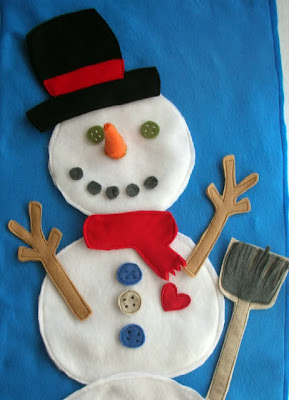 (thelittlegiggler.com)
It connects to a blog that shares instructions for making this cute felt snowman. (was this a hint?)  She did say how much she would love to make this for her son.  Hmmm?
Besides being really cute, the snowman is meant to be an interactive activity for kids.  With Velcro to help them stick, the parts can be removed and replaced.  Up the cute factor. 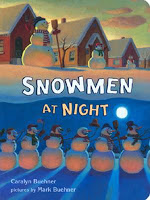 I already know my two year old grandson is into snowmen.  He reinforced that the next day when he asked me to read Snowmen at Night.  This is a book with an appealing story and delightful illustrations.  Are you getting the picture?  Yes, I'm rapidly getting sucked into this snowman thing. 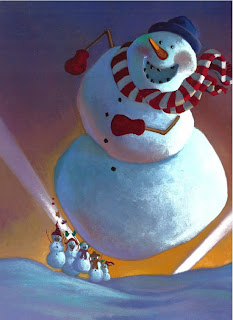 (illustrator: Mark Buehner)
So now we are down to 4 days 'til Christmas and I am strongly considering getting this done as a surprise. (This is on me.  My daughter would have been just as happy to have it in February)  But the bug had bitten and I knew I wasn't going to shake it. 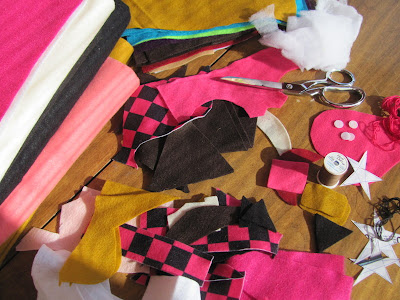 Be advised there won't be step-by-step instructions.  There won't be time for that.  Besides, the link above gives perfectly adequate directions.  Dress that snowman in the traditional top hat, give him a cowboy hat or a bike helmet.  The kids will love it any way you make it.


Creating with felt goes quickly. There is no fraying, so, no hemming needed. Although, I did follow the suggestion to create the pieces in double thickness for easier handling. This requires sewing the duplicate pieces together. If it wasn't for changing thread color numerous times, this would go quickly. (filling bobbins and threading needles again and again is a bit of a nuisance, but once you get caught up in the cuteness, it becomes well worth it.) 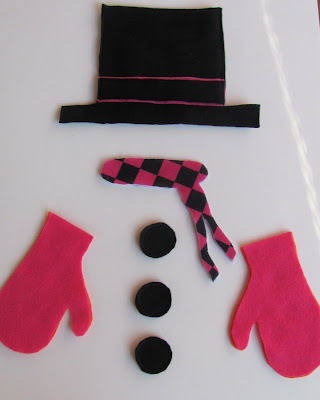 I started out with the top hat and scarf.  Of course buttons are a necessity.  I thought about adding grommets for the holes in the button but I couldn't find the thing that smashes them and holds them in.  Then I realized the Velcro has to go on the back anyway, so I plan to use thread to make them look like they are sewed on.  I'm going to use embroidery floss to add a blanket stitch to the scarf. 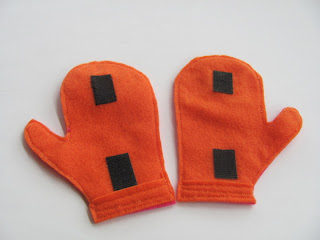 Yes, these are orange on the backside. I didn't have enough pink felt to double the thickness in pink. FYI:  In my haste I didn't think this project through to the end.  In retrospect I should have attached the Velcro to a single thickness of felt and then sewed the two pieces together.  That would have allowed me to do it on the machine vs finishing up the hand sewing on Christmas Day. 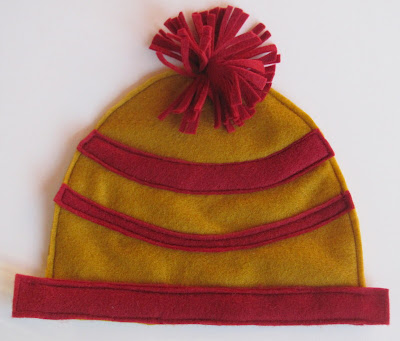 I wanted another hat for more casual events so I made this one. 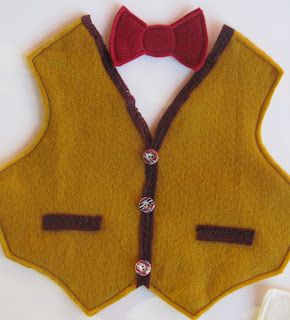 I tried to zig-zag the trim on the vest and screwed it up a bit because my stitch was a little too wide. But, of course, I ripped it out and redid it when I saw how tacky it looked in this picture.  The buttons are not attached in this shot either.  I may change those to something else. 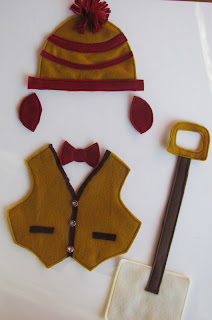 And if this dapper snowman is planning to clear the walks, he will need earmuffs and a shovel. 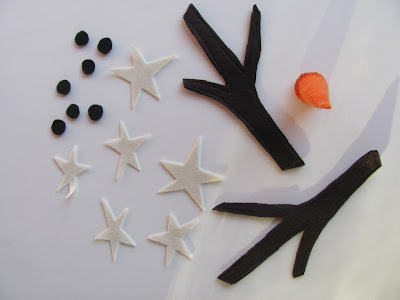 Tying to the Snowmen at Night story, I decided to add the moon and a few stars.  (Moon not shown...still on sewing table)  A few pieces of coal for the eyes and mouth, a carrot for the nose, and sticks for arms....I think I'm almost there. 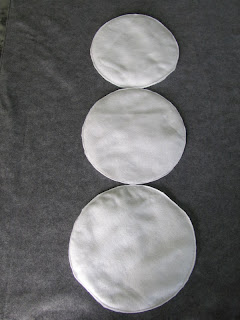 This is one of those projects that allows for personalization. Other than the three circles for the body and head, it is open to interpretation.  (Be careful.  It is tempting to just keep going.) 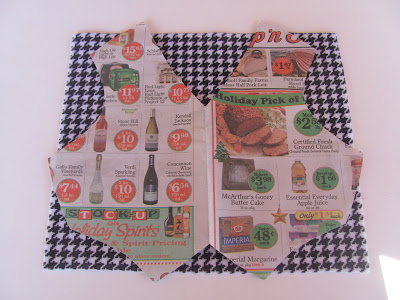 It's a good thing I had a deadline because creating a wardrobe for Mr. White was getting addictive.  I really wanted a vest from this piece of felt but, as you can see, that wasn't happenin'. 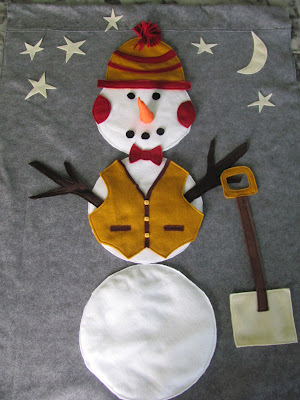 Since I will ruin the surprise if I post this before Christmas, I decided to make this my after Christmas post. (And, yes, I did change the buttons on the vest.) 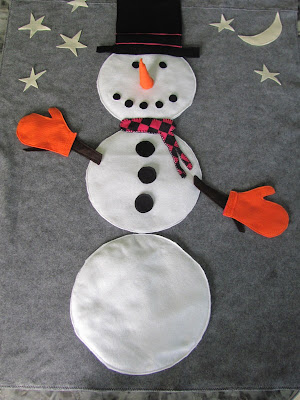 The orange is so cute with the nose.  Maybe I'll make him a little Halloween outfit in case we get an early snow next year.  I have a few months to think about that. 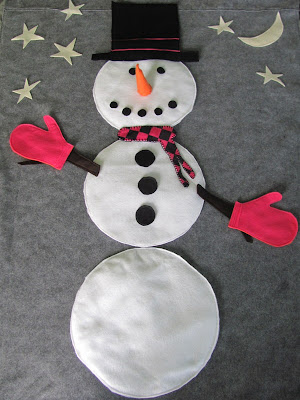 I think this snowman is waiting for a hug.  I believe he will get one soon when my grandson opens his last gift of the day.  Speaking of opening....hmmm??  Not sure how to wrap this without taking it all apart and somehow that ruins the effect.   I think this one will arrive unwrapped.


FYI:  There are four books in the snowman series by Caralyn Buehner. 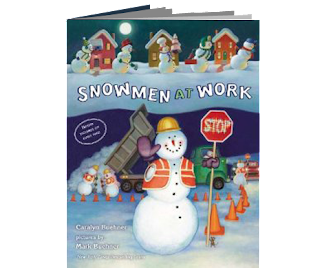 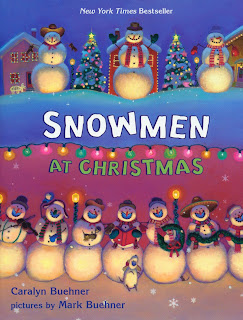 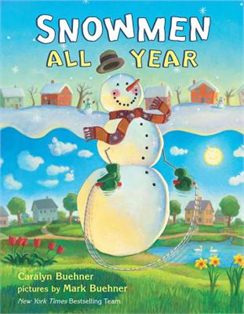 I'm looking forward to reading the rest of the series. I'm sure you know someone who might enjoy these stories too.  If you decide to make your own snowman, be sure to send me pictures.

I am linking to:  Wow Us Wednesdays
No Minimalist Here
Feathered Nest Fridayhttp://frenchcountrycottage.blogspot.com/2013/01/feathered-nest-friday.html

Popular posts from this blog

February 12, 2021
It has been a very slow crawl getting the finishing touches completed for the bedroom.  It's to be expected under the circumstances, but it feels a bit awkward trying to write a post now when the momentum has waned for so long. I'm thinking by starting a post, I might get things rolling again. Let's see if it works! Here are a few things that have materialized over the long gaps.  I did see a headboard pictured in a yard sale ad that I thought would work for my bed.  I showed up early, said I wanted the headboard without looking at anything else, paid, and went to my car.  The seller carried it to my car and put it in the back. That went quite well.   I cleaned it, primed it and painted it Dorian Gray, a color from my stash.  Attaching it to the bed was not a simple matter since my mattress sits on a metal frame.  Consequently I had to wait until my brother could make some adjustments and get it in place. One other small hurdle:  It had to cover an electrical outlet that i
Post a Comment
Read more

Out of No Where

September 13, 2010
Isn't it uncanny how a project can sneak into an already crowded schedule? Recently a friend invited me to do a walk through on a two-family he was planning to buy.  A couple pieces of furniture had been left behind and they were dumpster material to him.  Did I go with him thinking there was something there for me?   NO. Was I looking for something in particular? NO.  Did the thought of finding a new project ever cross my mind? NO!  But, see for yourself.  Could you have passed this up?  It was sturdy (translates to a little heavy). There was nothing wrong with it.  It even had all the shelves and the pins that hold them in place.  And without the shelves it was not quite as heavy.  (Try telling me that as my friend and I are hauling it down a flight of stairs.)  More shelving on the side made it even more practical.  I'm sure they could be used for something besides VHS tapes. Here it is in my studio where I could do a complete assessment.  Looks like a good cleaning
7 comments
Read more

September 20, 2013
I have no reason for this post other than the fact that it is raining and I had an urge to play.  Since there are no other reasons, there is no need for captions.  This is just a random string of photographs.
2 comments
Read more

Tricia
My blog is focused on what I saw, heard about, or encountered during my day. I ZOOM IN on things I find particularly interesting, beautiful, or humorous. My interests overlap and mesh in the fields of interior design, rehab, photography, architecture, color, and anything painted. Throw in salvage, bargain hunting, recycling and that summarizes what you are likely to find on this page.